Today, Noam Chomsky has given a short talk at Stanford. I simply couldn’t believe that Chomsky was on campus. Moreover, I knew this just 2 hours before the talk. No mails on the official graduate student mailing list, no posters on campus, no people talking about it, nothing.

When I walked into the plaza where he was supposed to give the speech, I couldn’t believe that such a few people had come to see this legendary man. It was 5:30pm, it was getting chilly, it was kind of windy, and the sun was going down. So yeah, the weather didn’t help either.

However, more people were coming, so in the end I think around 200 people gathered there. But still, this campus has thousands of students and thousands of faculty members.

Then my friends told me why this was such a secret event: This talk was organized by the Stanford says no to war movement and what they want is to kick out Condoleeza Rice from her place at Stanford University. She is now a Professor of Political Science and Senior Fellow, by courtesy of the Hoover Institution at Stanford. I didn’t even know Rice was here at Stanford. And… well, of course I was happy an event like that was held but at the same sad because of the few people we were there. 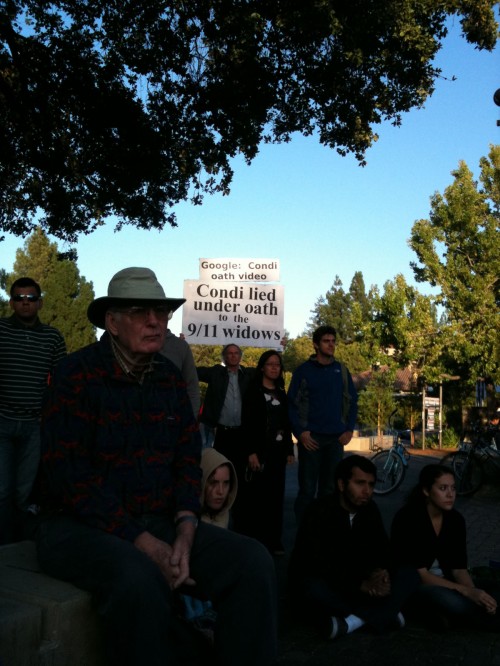 Some Professors and Graduate Students gave short speeches before Chomsky’s turn. Eighty years old, raspy voice, but with an amazing presence up there in the (small) stage. He gave a 10minute speech and I enjoyed every piece of it. This guy is a genius. We owe him so much. Among other things he strongly criticized the Nüremberg Tribunals, and he subliminally suggested a way to end up with this economic crisis. Enjoy: (http://www.youtube.com/watch?v=PjOStiS0jRg)

Thanks for organizing this.
Thanks Chomsky for helping us out in this strange and curious world and species.

Oh, and Condi, as fas as I know what you’ve been doing so far, I’d be really happy if you leave this campus asap…
Accountability now.