The Incident in San Francisco

Porcupine Tree is probably one of the most amazing bands around, and definitively one of my favorites. After four times of seeing them live, yesterday they blew me off again. The concert was in Warfield, a venue in the heart of San Francisco that it’s more like an opera place, with all these small balconies for the rich people that used to exist in the 17th century, a time when San Francisco didn’t even exist. 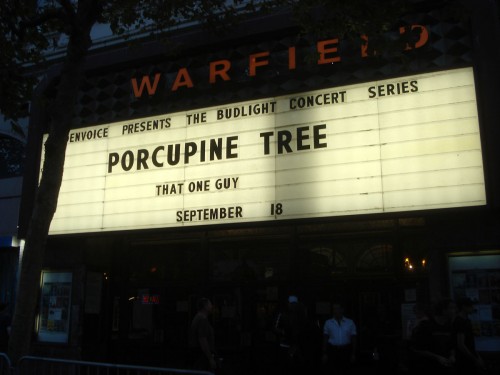 The opener was That One Guy, a very special guy who played this very special instrument that seemed like a celo, or a guitar, or a harp, or a drumkit, or a synthesizer. It was fun for the first 15 minutes, after that it was a little bit repetitive. But, damn it, the man was good and I enjoyed the showed. I like the mustache video he has on his web.

Then Porcupine Tree came out. And they played the whole first CD of their amazing new album, The Incident. Their videos were great, everything was on the metronome, everything synced. Amazing lights, amazing place, amazing music, amazing vids.

The second half of the show they played classics such as Starting of Something Beautiful, Anesthetize, Lazarus, … And, in my opinion, the best song they played: Buying a New Soul. I still can’t believe they played this one.

Finally, they closed with Trains, as always. I missed Blackest Eyes. And Stop Swimming, but I wasn’t expecting it anyway.

Once again, great show from one of the greatest bands ever.